Our cigarette business is founded on understanding and meeting the preferences of adult smokers in all parts of the world.

Not all cigarettes are the same. Smokers around the world prefer many different tastes and strengths and our companies aim for excellence in every step of manufacturing.

Food-type ingredients and flavourings are added to some types of cigarettes – typically American style blends – to balance the natural tobacco taste, replace sugars lost in curing and give individual brands their characteristic flavour and aroma. Other ingredients control moisture protect against microbial degradation and act as binders or fillers.

Nicotine is not added in making cigarettes. It occurs naturally in all varieties of tobacco plants.

The filter, paper and level of filter ventilation are all chosen to affect the sensory strength and smoke yield of the cigarette. At each stage, there is constant quality control and testing.

Main parts of a cigarette

The tobacco rod includes tobacco lamina (the flat part of the tobacco leaf) and tobacco stem (midribs of the leaf).

The filter is made mainly from cellulose acetate fibres, known as tow. Cellulose acetate is derived from wood pulp. The fibres are bonded together with a hardening agent, triacetin plasticiser, which helps the filter to keep its shape. The filter is wrapped in paper and sealed with a line of adhesive. Sometimes charcoal is added to filters.

Design adjustments achieve different strengths and tastes, and can reduce smoke yields of various smoke components, as measured by a standardised machine method.

What happens when a cigarette burns? 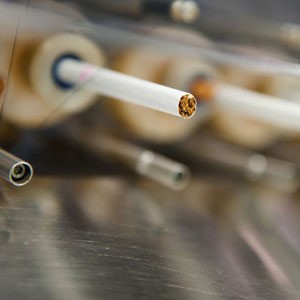 To understand cigarette design, it helps to know how a cigarette burns. It is the combustion process – the burning of the cigarette – that produces tar. If hay were burned instead of tobacco, it would also produce a type of tar. When an item burns, it produces tiny particles mixed with gases – this is smoke. A cigarette filter traps some of these particles.

When a smoker puffs on a cigarette, whole smoke, including both fine particles and gases, is sucked through the tobacco rod and the filter. Gases pass through the filter and some particles are trapped in it. It is this particulate matter, minus nicotine and water, that is called tar.

Smoke has over 4,000 constituents, many of them also found in the air we breathe and in our food. These constituents include the emissions listed on packs, such as tar, nicotine and carbon monoxide. Water vapour is also produced by the combustion, because the burning of any organic material breaks down the chemical components and produces water.

Our filter tips are biodegradable over a period of between a month and three years, depending on environmental conditions. Although we are researching more rapid breakdown, at present we know of no practical way of making consumer-acceptable filters that would degrade so quickly that they would not cause short-term littering problems.

Our business is not about encouraging people to start smoking or to smoke more, but about meeting the preferences of adults, who have chosen to consume tobacco, and differentiating our brands from our competitors.

British American Tobacco Cambodia is the leading cigarette company in the market, and manufactures and distributes the following international and local brands: State Express 555, Ara, Liberation and National.

The health risks of smoking?

Along with the pleasures of smoking there are real risks of serious diseases such as lung cancer, respiratory disease and heart disease, and for many people, smoking is difficult to quit.

Smoking is a cause of various serious and fatal diseases, including lung cancer, emphysema, chronic bronchitis, and heart diseases.

The health risks of smoking are derived from epidemiology. Epidemiology is a statistics-based science dealing with risks among large groups of people rather than with individuals. Through questionnaires and observations of people, epidemiological studies can identify the incidence of disease in a given group, such as smokers, and compare it with the incidence in another group, such as non-smokers.

Over many years epidemiological studies have consistently reported a much higher incidence of certain diseases among smokers compared with non-smokers. The studies also report that the risks are reduced after quitting and that quitting earlier has by far the best effect on reducing risks.

Traditionally, epidemiology has been used to identify associations that point to possible causes of a disease, providing direction for thorough laboratory investigations. With smoking, many laboratory investigations over the years have proved more problematic, and science has not to date been able to identify biological mechanisms which can explain with certainty the statistical findings linking smoking and certain diseases, nor has science to date been able to clarify the role of particular smoke constituents in these disease processes.

This means that science is still to determine which smokers will get a smoking related disease and which will not. Nor can science tell if an individual became ill solely because they smoked. This is, in part, because all the diseases that are associated with smoking also occur in life-long non-smokers.

We do not point out these scientific limitations to cast doubt on the fact that smoking is a cause of serious disease. An important point is that the lack of complete understanding about the biological aspects of the disease mechanisms, and the role of particular smoke constituents, create uncertainty for efforts to design less harmful cigarettes. British American Tobacco's work for many years has included, and still does, research into the assessment of potentially less harmful cigarettes. British American Tobacco remains committed to this work, although the scientific uncertainties make it a major challenge.

What people should consider:

Despite the serious health risks, many people continue to smoke conventional cigarettes.

No tobacco or nicotine product is 100% safe and anyone wanting to be totally risk free shouldn’t use them.

It is now widely acknowledged that most of the harm associated with smoking is down to the toxicants in the smoke produced when the tobacco in the cigarette is burned.

However, the principle of harm reduction is that, compared with continuing to smoke conventional cigarettes, it is better to switch to products that could be potentially reduced-risk.

Our global commitment to harm reduction is reflected in our commitment to offer adult smokers a range of potentially reduced-risk products.

We have developed a five-step framework (5.5 mb)  to evaluate the reduced-risk potential of some of our potentially reduced-risk products (PRRPs), relative to smoking cigarettes. We are open about our research and we publish the results of our studies on our bat-science  website and submit them to peer-reviewed scientific journals. 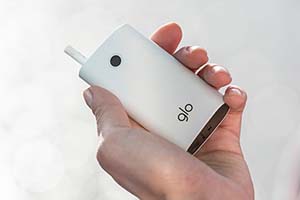 A series of tests conducted by BAT scientists1 assessed the reduced-risk potential of glo – which heats rather than burns tobacco – compared with conventional cigarettes.

Using data from chemical and biological tests, our scientists assessed glo in terms of the number and levels of toxicants in the aerosol that it releases and the biological impact on human and other cells in a laboratory compared with cigarette smoke.

The tests found that toxicant levels in vapour from glo were significantly reduced compared with smoke from a conventional reference cigarette2. They also showed that glo vapour, compared with cigarette smoke, had a much reduced or no biological impact on cells in a laboratory, depending on the test3. 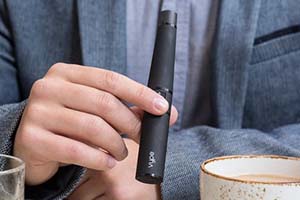 The results of our studies provide evidence that suggests Vype ePen has the potential to be reduced risk compared with conventional cigarettes.

There have been a number of independent reports and studies on vaping. In 2017, the British Medical Association published a position paper on e-cigarettes8, in which it said: “There are clear potential benefits to their use in reducing the substantial harms associated with smoking, and a growing consensus that they are significantly less harmful than tobacco use.”

Similarly, a review by the National Academies of Sciences, Engineering and Medicine9, a US-based organisation of leading researchers which analysed the results of more than 800 identified peer-reviewed scientific studies, concluded that “while e-cigarettes are not without health risks, they are likely to be far less harmful” than conventional cigarettes. 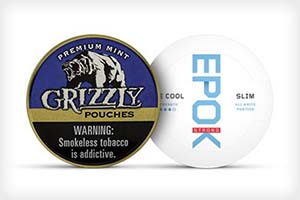 Having been in use for decades, there is well-established epidemiological evidence to determine the long-term health risks of these type of products. A number of independent health studies have shown Swedish-style snus to be significantly less harmful than smoking.